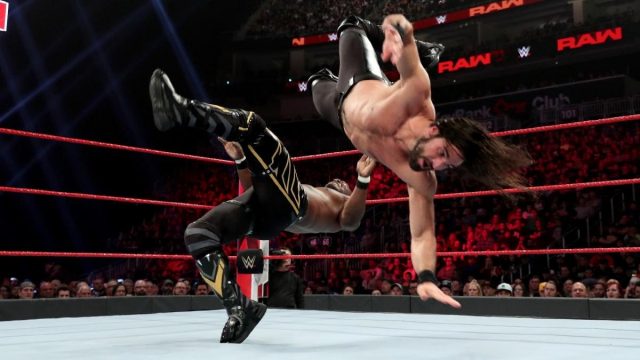 Seth Rollins vs Shelton Benjamin : The bell rings, and Benjamin quickly takes Rollins down with a waistlock. Paul Heyman is on commentary. Rollins applies a side headlock, but Benjamin fights out and takes him down.

Shelton Benjamin keeps a headlock applied, and the crowd is chanting, “Burn it down.” Rollins whips him off, but Benjamin shoulder blocks him down. Rollins quickly takes him down and chops the chest before connecting with a dropkick. Benjamin rolls out of the ring to recover.

Seth Rollins punches Benjamin in the face at ringside and bounces him off the barricade. Rollins throws Benjamin into the ring and punches him. Rollins is whipped into the corner, but he manages to boot Benjamin back.

Seth Rollins then hits a blockbuster off the second rope. Benjamin avoids a stomp and goes for a German Suplex, but Rollins lands on his feet and throws Benjamin over the top rope. Rollins goes for a suicide dive, but Benjamin kicks him in the face for a two count.

We come back from the break to see Rollins trapped in a chin lock. Rollins soon fights up and elbows out, but Benjamin knees him in the midsection and throws him out of the ring. Heyman is still on commentary.

Heyman says his client Brock Lesnar will be live on RAW next week in Chicago. Heyman says Lesnar has taken exception with Michael Cole on commentary. Rollins ducks a clothesline and hits a Sling Blade.

Seth Rollins charges Benjamin, but he’s dropped onto the apron. Rollins punches him back and hits a springboard clothesline for a two count. Benjamin catches Rollins with a release German Suplex. Benjamin hits a second German Suplex before teasing an F5. Rollins gets out, kicks him in the midsection, and connects with the Stomp for the win.

Rollback to the previous version of Windows 10