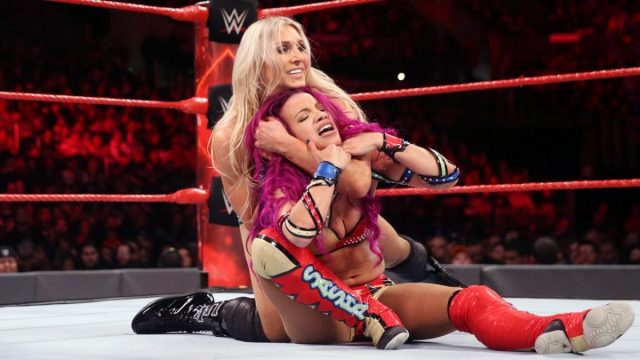 Charlotte Flair then pins her for a one count. Flair then slams her down. Banks pulls her headfirst into the turnbuckle before chopping her.

Charlotte Flair sidesteps an attack, but Banks comes back by slamming her down. Banks goes for a sunset flip, but Flair knees her in the head a few times for a two count.

Flair hits a snapmare and grapevines the head before driving it into the mat. Flair rolls her around the mat. Banks fights back, but Flair big boots her down before throwing her out of the ring.

We come back from the break to see Flair hit a backbreaker and apply a dragon sleeper. Banks seems to be fading away. Banks regains some momentum and knees her in the face before rolling her up for a two count.

Flair quickly kicks her down to her knees before sending her to the corner. Banks boots her back, ducks under a big boot, and clotheslines her twice before hitting a dropkick.

Flair reverses a whip, but Banks takes her down with a wheelbarrow bulldog for a near fall. Flair quickly stuns her with a jawbreaker and kicks her back. Banks comes back with a double knee attempt, but Flair slides out of the ring. Banks then lays her out with a double knee off the apron.

Dana Brooke runs down to help, but Bayley attacks her from behind. Flair knocks Banks off the top rope and keeps Bayley away. Banks then applies the Bank Statement for the win.