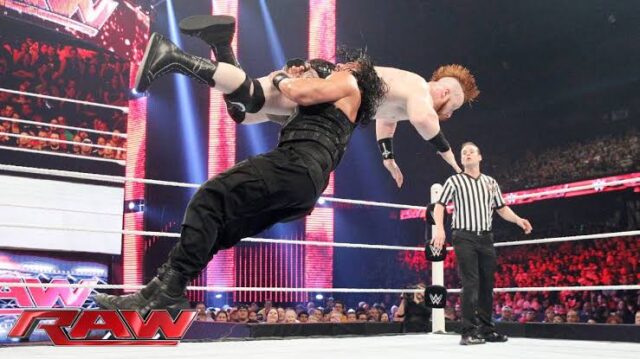 Before the match begins, Reigns shoves the suitcase out of Sheamus’ hands. The bell rings, and they quickly lock up. They tussle against the ropes before Reigns applies a side headlock. Sheamus whips him off, but Reigns shoulder blocks him down.

Sheamus quickly rolls out of the ring to regroup. Sheamus gets back in and kicks Reigns before clubbing him down. Sheamus applies a side headlock, but Reigns fights out.

Reigns throws him into the ring. Sheamus knees him in the face as he gets back in. Sheamus goes for the 10 Beats of the Bodhrán, but Reigns fights him off. Reigns punches him, but Sheamus clubs him in the ribs a few times before punching him off the apron to the floor.

We come back from the break to see Reigns trapped in a chin lock. The crowd is chanting for CM Punk of the UFC. Reigns begins to fight up and elbows out. Sheamus quickly takes him down with an Irish hammer.

Sheamus spikes his hair back up and asks the crowd if they’re entertained. Sheamus gets him to his feet, but Reigns counters back with a fireman’s carry flapjack. Sheamus slowly gets to his feet and charges, but Reigns throws him out of the ring.

Sheamus quickly gets in, and Reigns lays him out with a pair of clotheslines. Sheamus reverses a whip, but Reigns comes back with a diving clothesline. Reigns clotheslines him in the corner, but he again has a whip reversed.

Sheamus lowers his head and eats a kick. Reigns picks him up, but Sheamus slides off and goes for White Noise, but Reigns rolls out. Sheamus goes for a Cloverleaf, but Reigns boots him in the face. Reigns goes outside and hits a Drive By Dropkick followed by a Samoan Drop.

Sheamus puts him in the corner, but Reigns punches him in the face. Reigns drops him on the apron and knees him in the face. Sheamus goes to the top rope and dives into a Superman Punch. Reigns shakes the ropes as the crowd starts to boo. Bray Wyatt’s video flashes on the screen.

The lights go out, and Bray Wyatt comes out to the ring. Reigns meets him on the ramp and lays him out with a Superman Punch. Reigns looks at his fist and is holding some of Wyatt’s hair. It’s not Wyatt. Wyatt appears on the titantron laughing and says, “Anyone but you, Roman.” The lights come back on, and the referee counts Reigns out.