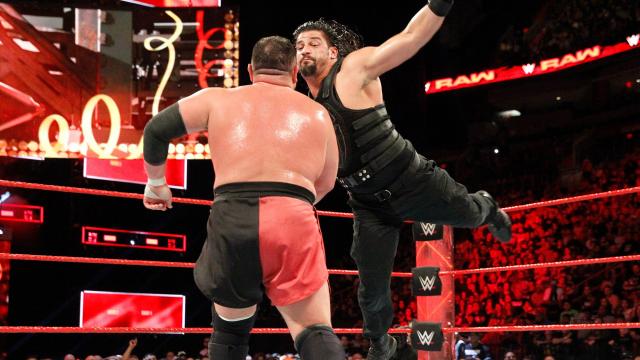 Joe punches away at him and gets in the ring. This match has not officially started yet. The crowd loudly boos Joe. Reigns slowly gets up, so Joe goes outside and kicks him in the chest. Joe sends him headfirst into the ring post before squashing him with a senton splash on the floor.

We come back from the break to see Reigns inside the ring on his feet. The referee asks if he can fight, and the match officially kicks off. Joe clotheslines him in the corner and punches him down before digging his knee into his face. Joe head-butts him and punches away at him.

Joe reverses a whip to the corner and avalanches him before hitting a pelé kick in the corner. Joe talks trash and head-butts him again. Joe chops the chest protector of Reigns, and Reigns no sells it. Reigns punches back at him and hits the ropes, but Joe takes him down with a back elbow.

Joe chops him in the back of the neck and kicks him before dropping an elbow for a two count. Joe hits a few crossfaces and jabs him in the face. Joe chokes him on the top rope and hits a suplex for a one count. Joe applies a surfboard stretch, but Reigns fights up and punches out. They trade punches before it turns into a hockey fight.

Joe knees him in the midsection and sends him into the ropes, but Reigns holds on and gives him a back elbow. Reigns punches and head-butts him. Joe reverses a whip, but Reigns takes him down with a leaping clothesline. Reigns goes for a Samoan Drop, but Joe fights out.

Reigns sidesteps him in the corner and clubs away at him nine times. Reigns big boots him, but Joe doesn’t go down. Reigns tries for another Samoan Drop, but he can’t lift him. Joe hits an inverted atomic drop, big boots him down, and hits a senton splash for a near fall.

Joe stalks Reigns while he slowly pulls himself up. Joe looks into his eyes and punches away at him before raking his boot against his face. Joe backs up for a big kick, but Reigns lays him out with a Samoan Drop for a near fall. Reigns sets up for a Superman Punch, but Joe just leaves the ring.

Reigns follows him out and hits a Drive By Dropkick. Reigns puts him in the ring and takes him down with a Superman Punch, infuriating the crowd. Braun Strowman’s music hits, and he makes his way to the ring. Reigns punches him when he gets on the apron.

Reigns then knocks Strowman off the apron with a Superman Punch. Joe catches him with an enzuigiri and viciously slams him down to pick up the victory!