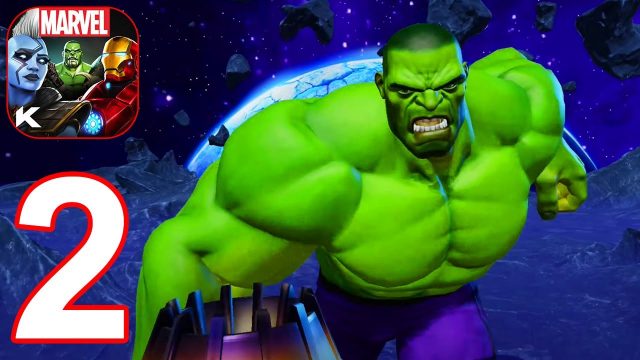 Long ago, Maestro, an evil version of the Hulk from an alternate future, forced shattered realities together to construct his own Battleworld. He ruled over these merged, alternate timelines filled with Gods and Warriors alike until he was secretly slain! With his iron grip no longer holding this world together, it has descended even deeper into disarray. Barons have risen to control their lands, looking to turn the tide of war in their favor. As this Secret War begins, it is up to YOU brave Summoner to solve the mysteries of Battleworld and take your true place as a powerful Champion!

•Play the Perfect Role – Tank with your Hulk and soak up hits while you attack hard with area disruption. Bring your Black Panther to excel in single combat at close range and inflict devastating damage. Annihilate the competition using high-powered ranged attacks with your Web Warrior and Iron Legionnaire. Amplify your allies with your Storm and Sorcerer Supreme to deal bursts of damage and vanquish entire groups of foes.

•Immerse Yourself in a New Marvel Universe – Marvel authenticity with a twist! Experience the deep story of Battleworld, full of mystery, intrigue, and ferocious battles with characters from across Marvel history.

•Lead Your Team to Victory – Strategize with your team to select the right mix of three Champions to dominate over the competition in action-packed team battles!

How to Empty Your Recycle Bin on a Schedule on Windows...