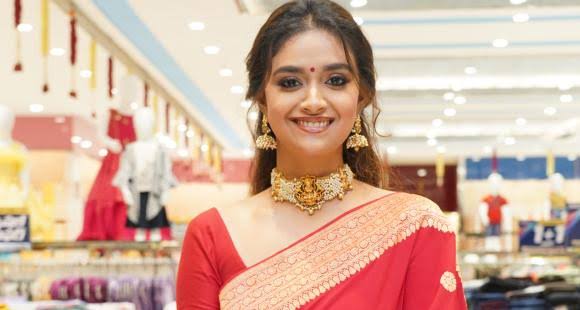 Keerthy Suresh is one of the most popular actresses of the South Indian film industry. Keerthy Suresh gained accolades and fans from all over the world for her performance in the National Award Winning film, Mahanati.

Be it at the airport or promoting her films, the actress slays in anything and everything. Especially while carrying the six years of grace, Keerthy totally nails it like no one else.

Keerthy Suresh, as we all know likes to keep everything simple and traditional. Today, yet again, the actress went for a classic ethnic look in saree at an event.

She was seen striking a pose and flashing her radiant smile. The actress defines grace and elegance in a red saree with a golden border, paired up with a choker and matching bangles.

The Mahanati actress kept her makeup simple with kohl eyes and red lipstick, with her hair half tied.

Check out some of the gorgeous looks in sarees below :

What do you think about this look?? Comment below!!