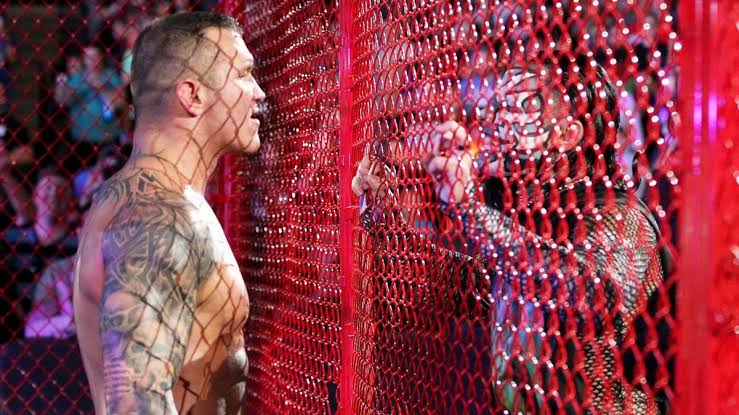 For Hardy, competing inside Hell in a Cell was one of the last few milestones he’d yearned to achieve in WWE, though he fought like a Superstar stepping into his eighth dance in the cage rather than his first.

With the psychological advantage he usually possesses rendered obsolete, Orton had no choice but to battle Jeff with pure brutality: After wearing Hardy down with lashes from his own belt, The Viper produced a toolbox from under the ring, pulled out a screwdriver and threaded it through Hardy’s earlobe, twisting the tool around and around in a sickening display until The Charismatic Enigma finally beat him away with a low blow.

Revitalized by Orton’s savagery, Hardy saw red. The Charismatic Enigma propped a chair on Orton’s chest and executed a pinpoint Swanton — aggravating The Viper’s already-wounded back — before erecting a sinister setup involving two ladders (a short one and a tall one) and a table. After propping Orton up on the table, Hardy scaled the smaller ladder, seemingly planning a leapfrog.

Then, he audibled onto the taller one, seemingly planning a Swanton. Then, Hardy left the ladders entirely, suspending himself from the Cell roof like monkey bars, dropping for what appeared to be some kind of splash on The Apex Predator.

Only Orton moved. And Hardy crashed and burned, shattering the table in his attempt to put Orton away. Much to the referee’s horror, Orton made the cover and insisted on defeating his opponent with a 1-2-3, and the official counted the pinfall, if only to get The Apex Predator out of the ring so EMTs could strap Hardy to a stretcher and wheel him away.

It was the result Orton wanted for sure, and, perhaps, the one Jeff Hardy wanted as well. After all, he said would take Randy Orton to hell with him. He didn’t say anything about coming out.