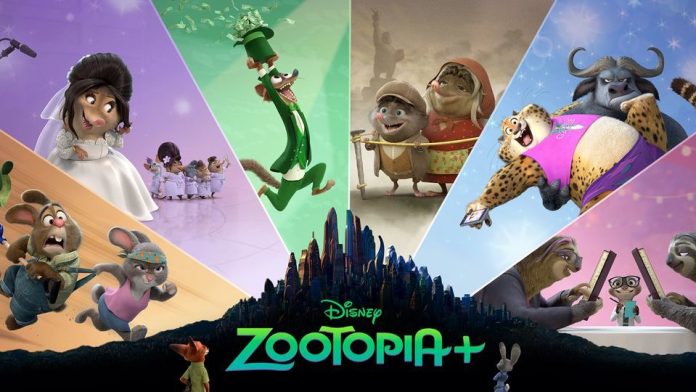 “Zootopia+” heads back to the fast-paced mammal metropolis of Zootopia in a short-form series that dives deeper into the lives of some of the Oscar®-winning feature film’s most intriguing residents, including Fru Fru, the fashion-forward arctic shrew; ZPD dispatcher Clawhauser, the sweet-toothed cheetah; and Flash, the smiling sloth who’s full of surprises.

The series is directed by Josie Trinidad (Co-Head of Story, “Zootopia”; Head of Story, “Ralph Breaks the Internet”) and Trent Correy (Director, “Once Upon a Snowman” and “Drop”), and produced by Nathan Curtis (Associate Producer, “Encanto” and “Raya and the Last Dragon”).

1. Hopp on Board – When Judy boards the train from Bunny Burrow to Zootopia to begin her life as the big city’s first bunny cop, Stu and Bonnie’s youngest daughter, Molly, hitches a ride atop the train, forcing the down-to-earth duo out of their comfort zone and into an action-packed rescue mission.

2. The Real Rodents of Little Rodentia – Newly engaged, Fru Fru kicks off wedding planning with enthusiasm and flourish—at least until her scene-stealing cousin Tru Tru arrives to assume the role of Shrew of Honor. A battle for the spotlight ensues until a close call with a giant donut reveals that for better or worse, no one knows you better than family.


3. Duke the Musical – After being wrangled and arrested in a giant donut—compliments of Officer Judy Hopps—clever criminal weasel Duke reevaluates his life, pondering where he went wrong—in song. In a musical aptly staged in his own mind, Duke contemplates how to go from a small time crook to the Big Time!

4. The Godfather of the Bride – A touching tale about the powerful arctic shrew known as Mr. Big revisits Fru Fru’s big day when he delivers a revelatory father-of-the-bride speech. Taking guests back in time to his days as Mr. Small, a new immigrant to Zootopia, he imparts the wisdom he gained then about the importance of friends, family and community.