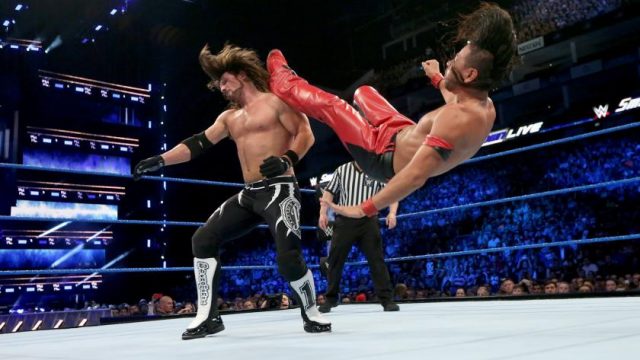 The bell rings and we are under way! Both men lock up and both men with reversals. A kick to the gut by Nakamura as he slaps AJ around.

Nakamura runs to the ropes but a dropkick by Styles. Chops to the chest by Styles. He goes for a suplex but Nakamura blocks it. Instead Styles with a back breaker.

Nakamura rolls to the outside of the ring. AJ with a phenomenal forearm over the top rope onto the outside. He throws Nakamura back into the ring but Shinsuke rolls back out.

Styles runs towards Nakamura but kick to the face takes Styles out. Both men back in the ring as Nakamura goes for the cover but a kick out by Styles.

Back from commercial, Nakamura is beating on Styles as he starts choking AJ. Styles starts to fight back but a kick to the face by Nakamura. He goes for the cover but a kick out by AJ Styles.

A headlock by Nakamura is turned into a dragonsleeper. AJ with a knee gets out of the hold. Nakamura puts Styles up on the top rope and he goes for a suplex off the top rope but Styles slides under and a Pele kick takes Nakamura out.

AJ Styles now with a few strikes and a clothesline takes Nakamura out. AJ with a flying forearm onto Nakamura. He goes for the cover but Nakamura kicks out.

A set of reversals sees Nakamura deliver the landslide. He goes for the cover but Styles kicks out. Nakamura with knees to the stomach as Styles rolls onto the ring apron.

AJ goes for a forearm but Nakamura kicks him off. Nakamura with a knee to the face but AJ Styles kicks out. Shinsuke Nakamura going for another one but a spinning kick by AJ Styles.

AJ onto the ring apron, he goes for the Styles Clash, Nakamura ducks and AJ is about to thit the referee but stops. Nakamura pretends like he got hit with a low blow which leads AJ to argue with the referee. As he’s doing so, Nakamura delivers the Reverse Exploder and then the knee to the face and he gets the win!

Learn to Check Battery Usage by Apps in Windows 11