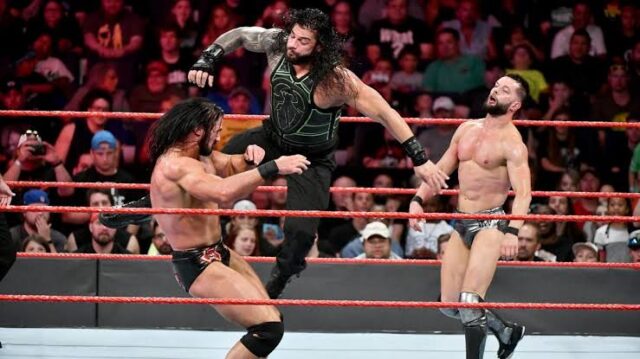 The bell rings, and McIntrye punches Balor down. Reigns punches McIntyre to the corner, but he’s punched back. Balor starts punching McIntyre. Reigns goes for a Samoan Drop on McIntyre, but he slides off.

McIntyre then clotheslines Reigns and Balor. McIntyre bounces him in the corner and punches away at him. McIntyre concentrates on both men. McIntyre grabs Balor by the throat, but Balor fights him off and connects with a dropkick.

Balor then forearms Reigns down. Reigns reverses a whip into the ropes and clotheslines Balor down. Reigns goes outside and tries for a Drive-By Dropkick, but Balor moves. Reigns is laying on the apron, so Balor hits a slingshot double stomp. McIntyre then comes from out of nowhere to take Reigns out with a summersault senton!

Balor hits a slingshot kick and goes to the top rope, but McIntyre crushes him with a chair shot that sends him to the floor. McIntyre tries to hit Reigns, but Reigns floors him with an uppercut. McIntyre soon gets the upper hand by sending Reigns into the ring post shoulder-first for a near fall.

We come back from the break to see Reigns punching McIntyre and connecting with a big boot. Reigns signals for a Superman Punch, but McIntyre counters with a spinebuster for a near fall. McIntyre sets up for a move, but Balor cracks him in the back twice with a chair.

McIntyre is knocked out of the ring. A “YES” chant fires up while Balor wildly hits Reigns in the back with the steel chair. Balor goes outside and gives McIntyre a stiff dropkick into the corner. Balor then avoids Reigns charging, so McIntyre takes a spear into the timekeeper’s area.

Balor hits Reigns with a Sling Blade on the floor. Balor gets him in the ring and hits a second Sling Blade. Balor backs up and charges, but Reigns floors him with a Superman Punch for a near fall. Reigns cannot believe it. The commentators wonder if Reigns still believes in himself after all the setbacks he’s had.

Reigns sets up for a Spear, but Balor kicks him in the face and dropkicks him hard into the corner. Balor hits the Coup de Grace and covers, but McIntyre pulls him out of the ring! McIntyre clubs him on the outside and sends him into the steel steps. McIntyre gets in the ring and eats a Superman Punch from Reigns.

Enable Dark Mode on your Chromebook