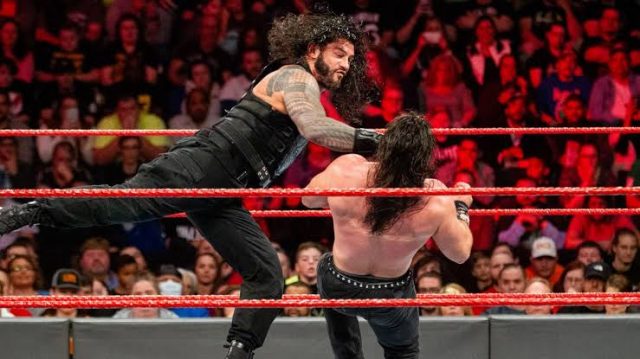 They lock up a third time, and Elias gets him in the corner. Elias shoulders him in the corner before backing up. Reigns comes back with three right hands. Elias reverses a whip and turns him inside out with a knee to the midsection for a one count.

Elias then sends him shoulder-first into the ring post for a near fall. Elias then applies a chin lock. Elias rips at the mouth and drives his knee into Reigns’ back. Reigns fights up and punches out. Reigns hits the ropes, but Elias follows him in and clotheslines him down for a two count.

Elias then reapplies the chin lock and really cinches it in. Reigns eventually fights up and drives him hard into the corner twice. Reigns hits the ropes and connects with a pair of clotheslines.

Elias reverses a whip, but Reigns comes back with a diving clothesline. Reigns clubs him in the corner before Bo Dallas gets on the apron to distract him. Reigns punches him off. Curtis Axel gets on the apron on the opposite side and scurries away when Reigns charges. Elias then floors Reigns with a flying high knee for a near fall.

We come back from the break to see Elias applying a chin lock to Reigns. Reigns fights up, but Elias sends him into the ropes. Reigns holds on and elbows him back. Elias still tries for a side headlock, but Reigns shoves him out of the ring.

Reigns goes outside and hits him with a Drive By Dropkick before putting him in the ring. Dallas charges, but Reigns floors him with a Superman Punch. Axel then backs up and points at his neck brace. Reigns pretends to walk away before turning around to Spear him on the floor!

Elias quickly sends Reigns into the ring post, the barricade, and puts him in the ring. Elias goes to the top rope and hits a diving elbow drop for a near fall! Elias gets him to his feet, but Reigns tries to counter with a Samoan Drop. Elias slides off and sends him to the corner.

Elias gets him up in position for an electric chair before spinning him around and hitting a sit-out powerbomb for a near fall! A “This is awesome” chant fires up. Elias tries to pull him up, but Reigns is dead weight.

Elias goes for a suplex, but Reigns counters into an inside cradle. Elias quickly punches him and hits the ropes, but Reigns hits a Superman Punch for a near fall. Reigns can’t believe he kicked out.

Reigns sets up for a Spear, but Elias kicks him in the face. Elias hits the ropes, but Reigns changes directions and floors him with a Spear for the win!