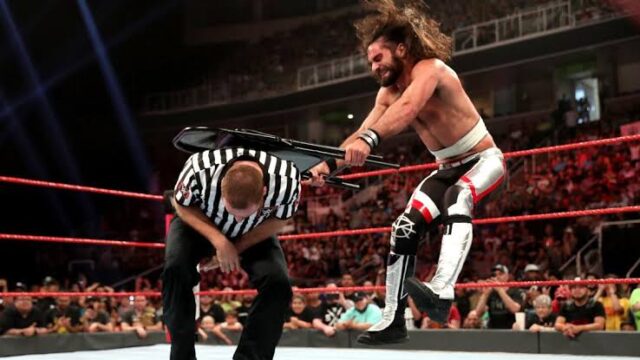 Sami Zayn tells the referee he needs his trust in the ring. He calls Seth Rollins and says he has to check him. Seth has his ribs taped up and Sami wearing his referee shirt asks Rollins if he has a knife. He checks his boots. In contrast, he quickly dusts down Kevin Owens. Sami Zayn goes to the outside of the ring and the bell rings.

An arm bar by Seth as Owens grabs the ropes. Seth doesn’t let go right away as Owens calls him a cheater. Sami gets on the ring apron and says to break it up. Owens with an arm bar on Rollins but Seth acrobatically gets out oif it and reverses it into a snap mare.

Back from commercial, a side slam by Kevin Owens as he continues to work on Seth’s injured ribs. Seth is cut near his left eye. A drop kick from behind by Owens takes Rollins out. Owens goes for the cover but a one count only.

A right hand by Owens as he pushes Seth into the turnbuckle. A shot to the stomach by Owens. A right hand by Kevin Owens followed by another right hand. Owens lifts Seth on his shoulders but Seth with elbows to the head. A headbutt by Seth but a knee to the ribs by Owens. The slingblade by Rollins. Seth goes for a suplex but Owens reverses it into a knee to the face.

Kevin Owens climnbsbs the top rope, he goes for the senton but Rollings got his knees up. Owens, in pain, rolls to the outside. Seth Rollins with a suicide dive onto Owens but a right hand by Owens blocks it. Owens goes for the pop up powerbomb but Seth lands on his feet. A kick to the face by Seth followed by a step-up inzighuri.

Seth Rollins climbs the top rope as Sami Zayn gets in the ring to check on Kevin Owens. Seth climbs down as Owens goes for a roll-up but a kick out by Seth.

Owens runs towards Seth but Seth lowers the top rope and to the outside Owens goes. Seth with a suicide dive as he lands on Kevin Owens and Sami. Seth with the curb stomp. He goes for the cover but Sami pulls the referee out of the ring. Sami says Seth should be disqualified.

Sami Zayn gets in the ring and he checks up on Kevin Owens. He starts talking to Seth Rollins as the two argue. Seth grabs Sami as Sami calls for the bell.

How to boot Windows 10 in Safe Mode