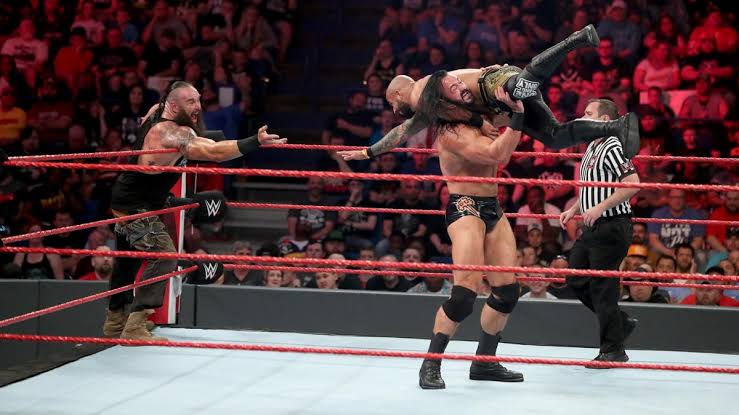 Corbin knocks Braun Strowman into Ricochet and punches away at him. Strowman soon shoves him over the top rope. Corbin quickly gets in the ring, but Strowman grabs him.

Corbin fights out, but Braun Strowman clotheslines him over the top rope. Ricochet tags in, kicks Corbin from the apron, and hits him with a moonsault off the second turnbuckle.

Ricochet gets him in the ring and hits a springboard clothesline. The crowd chants Ricochet’s name. Drew McIntyre tags in, and they lock up. McIntyre throws him to the corner, but Ricochet gets out and punches him. Ricochet hits the ropes, but McIntyre catches him and goes for a suplex.

Ricochet gets out and hits the ropes, but McIntyre viciously chops him down. Ricochet quickly punches at him, but McIntyre just as quickly back elbows him down. Baron Corbin tags in and chokes him on the ropes. Corbin knees away at him before applying a chin lock. Corbin cinches it in, and we see Ricochet is bleeding from the mouth.

Ricochet fights up and punches him. Baron Corbin sends him to the ropes, but Ricochet flips over him before hitting a head-scissor takeover. Ricochet kips up and dropkicks him down. Ricochet knocks McIntyre off the apron. Ricochet goes for a springboard maneuver on Corbin, but Corbin uppercuts him out of mid-air.

We come back from the break to see Corbin standing over Ricochet. Corbin elbows him in the chest a few moments. During the commercial break, McIntyre hit Ricochet with a massive back body drop. Corbin stomps Ricochet before taunting Strowman.

Corbin sends Ricochet to the corner, but he runs into a boot. Ricochet goes for a dropkick, but McIntyre sidesteps it before throwing him out of the ring. McIntyre goes for a sneak attack, but Strowman comes to Ricochet to cut him off.

Corbin tries to attack Strowman from behind, but it doesn’t hurt him. Strowman chases Corbin around the ring until McIntyre wipes him out with a Claymore Kick. Corbin gets Ricochet in the ring and picks up a two count.

Corbin punches away at Ricochet in the corner before bouncing him off the top turnbuckle. McIntyre tags in and chops Ricochet down for a two count. McIntyre applies a modified arm bar and digs his forearm into Ricochet’s face.

Ricochet fights up, but McIntyre takes him down with a tilt-a-whirl backbreaker for a two count. Corbin tags in and mocks Ricochet. Corbin puts him in the corner, and Ricochet catches him with an enzuigiri. Ricochet then hits a rolling dropkick.

Strowman and McIntyre are tagged in. Strowman hits two running shoulder blocks before avalanching him in the corner. Strowman clubs him in the chest to take him down before trying another avalanche, but he hits the ring post shoulder-first when McIntyre moves.

Ricochet quickly tags in, and he attacks McIntyre. McIntyre then hits him with a Glasgow Kiss. Corbin blind tags in on McIntyre and goes for Ricochet, but Ricochet gets away and tags in Strowman.

McIntyre attacks Corbin from behind. Strowman tags Ricochet in before hitting Corbin with a Running Powerslam. Ricochet follows up with a shooting star press for the win.