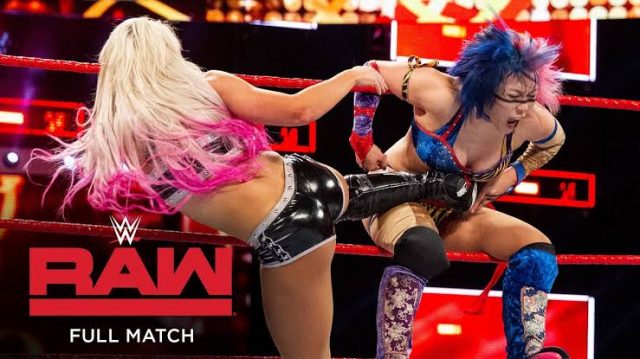 Alexa Bliss runs scared to the ropes to keep her back. Asuka has a whip into the ropes reversed, and she shoulder blocks Bliss down. Asuka then mocks her. Asuka wipes her out with a running hip attack.

Asuka hits her with a snapmare and knees her in the face twice. Bliss puts herself through the ropes once again before getting a cheap kick in on Asuka. Bliss immediately gets out of the ring. Asuka wasn’t hurt by the kick.

Alexa Bliss goes outside and twists Asuka’s midsection around the ring post. Bliss gets her in the center of the ring, punches away at her, and picks up a two count. Asuka quickly pins her for a two count. Bliss takes her down with a backbreaker before punching away at her to pick up another two count. Bliss reapplies the body scissor.

Asuka is trapped for a bit, but turns around. Bliss then hooks her in a guillotine. Asuka gets out with a Kimura Lock, but Bliss gets to the ropes. Bliss quickly takes her down with a shot to the ribs and stomps her in the corner. Bliss feigns an avalanche and slaps her.

Bliss blocks a takedown and elbows her. Asuka blocks a kick and viciously knees her in the face. Bliss stumbles to the corner and tries for a desperation victory roll, but Asuka sits on her shoulders for a near fall.

Bliss then dropkicks Asuka out of the ring. Asuka kicks her in the side of the head, gets in the ring, and applies her arm bar. Bliss taps out!

Windows 10 to get features, UX improvements from modular OS