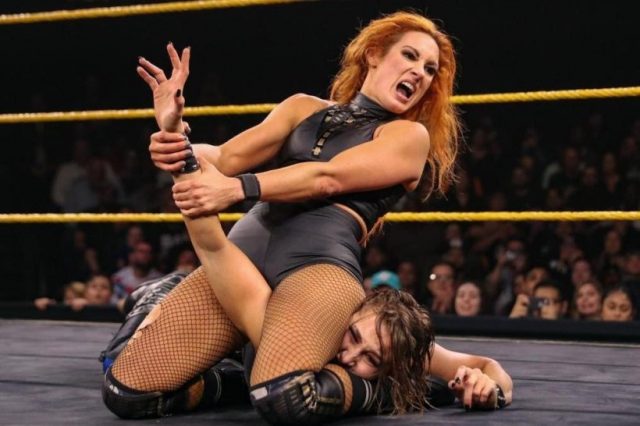 They lock up, and Ripley applies a side headlock. Lynch whips her off and shoulder blocks her down. The WWE NXT crowd boos Lynch. Ripley quickly gets her in the electric chair and drops her on the apron.

We come back from the break to see Rhea Ripley standing over Becky Lynch. Ripley pushes at her until Lynch fights back. Ripley sends her into the ropes and puts her on the apron.

Becky Lynch kicks and knees her back. Lynch goes to the second rope, but Ripley cuts her off and slams her to the mat. Lynch counters a body slam into a reverse DDT.

An “WWE NXT” chant fires up. Both women are down. They get to their knees and exchange punches. Lynch kicks her down and hits the ropes, but Ripley takes her down with a flapjack for a near fall.

Ripley powers Lynch up with one arm, but Lynch counters into a whip throw. Ripley puts Lynch on the apron, but Lynch punches her back. Lynch goes to the top rope, but Ripley cuts her off. Ripley then takes her down with a superplex. Another “WWE NXT” chant fires up.

NXT Women’s Champion Shayna Baszler runs down with Jessamyn Duke and Marina Shafir. They attack Lynch and Ripley. Lynch and Ripley fight them off, and Baszler escapes. Ripley and Lynch then wipe out Duke and Shafir.