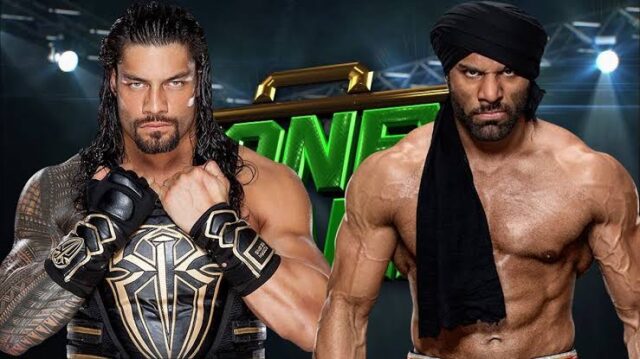 After a fairly underwhelming build, Roman Reigns and Jinder Mahal came face to face tonight at Money in the Bank.

Sunil Singh was out first in a wheelchair to introduce the modern-day Maharaja, Jinder Mahal, who received a fairly muted reaction from what had been, until this point, a considerably red hot crowd in Chicago.

The Chicago crowd soon came back to life though, hitting Roman Reigns with a barrage of boos as he entered the ring. Of course, though, the commentators tried putting Reigns over with the usual ‘most polarizing figure in sports entertainment’ shtick.

The crowd remained hostile as the two men locked up to kick things off. The two got going with a series of big right hands, with Reigns gaining the early advantage and taking Jinder down with a forearm.

Clearly intent on taking over the match, the crowd began a ‘CM Punk’ chant inside the first minute of the bout.

Reigns then dropped Mahal early with a Samoan drop, only for the crowd to greet him with a ‘boring’ chant.

Reigns continued to dominate the bout, only to miss a drive-by on the outside and be driven into the ring-post by Sunil Singh, who miraculously, and hilariously, jumped up out of his wheelchair to come to Jinder’s aid.

Jinder then took control of the match, with the crowd chanting ‘this is awesome’ as Jinder locked in one of his signature headlocks. Jinder then continued to lock in a series of holds, while Sunil Singh continued to steal the limelight with some excellent facial expressions on the outside.

Reigns rallied back briefly, before Jinder hit a shoulder block, sending the big dog to the outside. The commentators tried selling the crowd as ‘hostile’ as Jinder continued to dominate proceedings.

The crowd seemingly became distracted by something happening as Jinder carried on locking in a headlock before taunting the Chicago fans.

Roman then came back with a series of clotheslines, allowing him to gain some momentum in the match. Jinder tried to hit a move from the top rope but Reigns took him down with a big-right, proceeding to keep Jinder in the corner with a series of shots.

Jinder then stopped Reigns in his tracks, hitting a big knee from the ropes. Jinder then tried to lock in the khalass but Roman reversed it into a Samoan drop and the match’s first near-fall.

Reigns then got locked and loaded in the corner and went for a superman punch but Jinder managed to turn it into a gut-buster and looked to have been busted open a little, with a gash opening up on the side of his face.

Jinder then went for another khallas but Reigns pushed him back into the corner before hitting a superman punch, which Jinder kicked out of at 2.

With Jinder struggling to get to his feet, Roman let out a roar and tried a spear, only for Jinder to counter it into a big kick and throw his opponent into the corner.

The two men then traded punches before Roman took Jinder down with an impressive leg drop between the ropes. He then followed that up with a drive-by before Sunil Singh got himself involved again. Reigns was ready this time though, and he managed to stop himself from hitting the post.

Reigns then followed that up with a superman punch to Sunil and one to Jinder. Poor Sunil then ate a spear for his efforts but Jinder capitalised and managed to roll-up Roman for a near-fall.

Of course, though, Roman then came back and hit a spear on Jinder, picking up the 1-2-3 and one of the night’s most predictable victories.