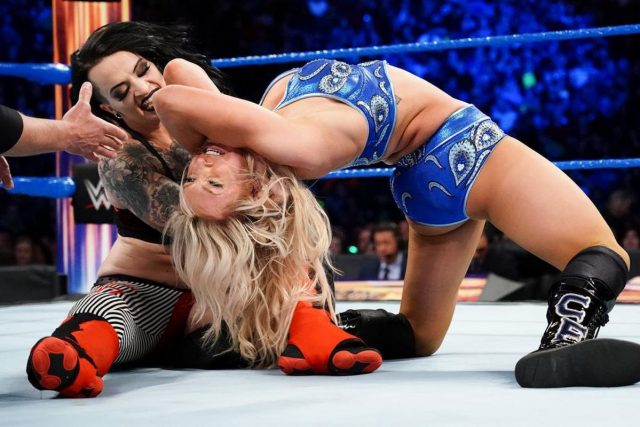 Back to the ring and out comes the leader of The Riott Squad by herself, Ruby Riott. SmackDown Women’s Champion Charlotte Flair is out next. We get formal ring introductions from Hamilton.

Flair catches Ruby with a fall-away slam. Flair charges into the corner and gets kicked back. Ruby is on Flair’s back in the corner now. Flair rams her back but can’t knock her off. Ruby stays locked o Flair’s back and causes them to tumble to the apron and then out to the floor.

Flair breaks it and sends Ruby into the barrier a few times. Flair brings it back in the ring and is distracted by Liv Morgan and Sarah Logan, who have appeared at ringside. Flair is distracted as Ruby kicks her in the back of the head from the apron. Ruby works Flair over and brings her back into the ring.

Ruby drops Flair with a Riott Kick and covers for a very close 2 count. Ruby distracts the referee and says something is in her eye. Liv and Logan stalk Flair on the outside but Naomi and Becky Lynch run down to even the odds. Ruby brings Flair back into the ring as the other 4 argue at ringside. Ruby mounts Flair with strikes.

Ruby tries to overpower Flair but Flair hits a slingshot suplex to turn it around. Flair gets dropped face first in the corner now. Ruby with a cannonball senton out of the corner for a 2 count as Liv and Logan cheer her on. Ruby works Flair over with more offense and keeps her grounded in the middle of the ring now.

Ruby keeps Flair down with a submission as Liv and Logan look on taunting her. Ruby bends Flair back as Becky and Naomi cheer her on. Riott continues to work Flair around the mat and talk trash about her failing while tightening the holds.

Ruby breaks the hold and drops Flair with a STO for a 2 count. Ruby goes to the top but it backfires. Flair looks to make a comeback now and hits a neckbreaker. Flair goes to the top for the moonsault but Ruby comes back and knocks her out to the floor.

Ruby runs the ropes for a dive but Flair catches her on the floor and launches her into the barrier. Flair stands on top of the barrier and nails a moonsault for a pop. Flair brings it back into the ring for a 2 count. Flair with a single-leg takedown. The Figure Four is blocked but Flair charges with a knee to the jaw.

Flair misses in the corner and hits a boot. Ruby comes right back and climbs to the top with Flair. Flair fights back. Riott climbs up and hits the hurricanrana for a 2 count. We get a replay of the move. Ruby with chops to the chest as they work their ways up to their feet, mocking Flair.

Flair takes them and gets fired up, delivering chops back of her own as fans do the “Wooo!” with her. Flair counters with a backbreaker and sends Ruby into the middle rope. Ruby counters and sends Flair face first into the corner.

Liv and Logan try to enter the ring but it’s just to bait Becky and Naomi into the ring. The referee is distracted. He ejects Naomi and Becky, allowing Liv and Logan to run over and beat on Flair. The referee turns around and sees something is up. He also ejects Liv and Logan. Ruby isn’t happy.

Fans sing “goodbye” and Liv screams as they head to the back. Flair takes advantage of the distractions and makes a comeback on Ruby. Ruby rolls her up for a 2 count out of nowhere. Flair blocks the Riott Kick.

Flair catches Ruby and catapults her face first into the corner. Ruby smacks her face hard on the turnbuckle. Flair spears Ruby and goes for the Figure Four in the middle of the ring. Flair bridges into the Figure Eight and Ruby immediately taps.

After the match, Flair stands tall with the title as we go to replays. We come back and out comes RAW Superstar Asuka as the music hits and fans pop. Asuka marches in the ring and stares Flair down. Asuka faces off with Flair and points up at the WrestleMania 34 sign.

The Empress of Tomorrow is cashing in her Royal Rumble title shot against Flair at WrestleMania 34. Asuka leaves as her music plays. Flair points at her and Asuka smiles back while heading to the back. Flair looks up at the WrestleMania banner.