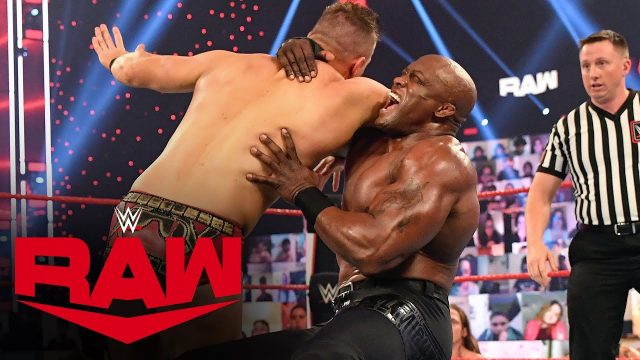 At the planned 9 p.m. start time, Miz claimed to have cramps and diarrhea, leading Lashley to attack him backstage. Adam Pearce pushed the match back an hour, and Miz made an appeal to MVP and Lashley to have the match at WrestleMania instead, which they refused.

As soon as the match began, Miz rolled out of the ring, grabbed his belt and ran to the back, taking a countout victory. Backstage, McMahon said there would be an actual title match or he would strip Miz of the title and award it to Lashley.

with the Hurt Lock to win the title. Before the main event, McMahon made the bout a lumberjack match. Miz tried to hit Lashley with the championship belt after the bell rang, trying to force a disqualification, but Lashley intercepted the blow.

Miz then tried to run from the ring but was thrown back in by the lumberjacks. Lashley dominated Miz before locking in the Hurt Lock to force the submission and win the championship.

Bobby Lashley finally gets his hands on The Miz with Raw Superstars surrounding the ring in a Lumberjack Match for the WWE Championship. Catch WWE action on WWE Network, FOX, USA Network, Sony India and more.