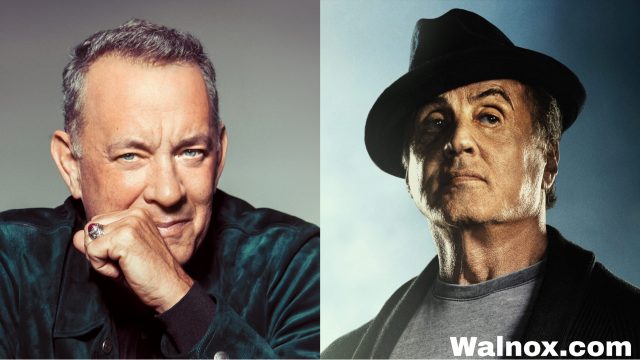 Sylvester Stallone : He rose to prominence after playing the role of Stanley Rosiello in The Lord Of The Flatbush.

He later gained greater success as an actor with his self-created role as a boxer named Rocky Balboa in the 1976’s Rocky Series.

His role as Rocky gained him two Academy Awards nominations for the Best Original Screenplay and Best Actor.

Sylvester Stallone is the only actor in the history of US cinema to have been a part of box office number-one films across five consecutive decades.

Tom Hanks the American actor is popular for his comedic and dramatic roles in the industry. His popularity has spread worldwide making him an international star.

Tom Hank’s movies are among the highest-grossing films in the industry, grossing more than $9.96 billion worlds wide. Tom Hanks got his major breakthrough with the 1984 movie Splash and the 1988 movie Big.

Some of his notable roles are as a gay lawyer in the movie Philadelphia and a man with a below-average IQ in Forrest Gump. Tom Hank was awarded two Oscars for his roles in these two movies.