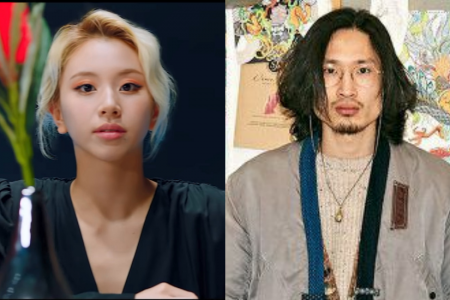 Word on the street has it that TWICE member Chaeyoung (채영) is rumoured to be dating a 30-something tattoo artist known as Chim Hwasa (real name Jung Sung Hyun, 정성현).

The rumours sparked after netizens discovered a snapshot of the duo during a shopping session together. Though their faces were not visible, people were quick to assume that the girl in the photo is Chaeyoung.

This is due to the white fuzzy hat worn by the individual in the aforementioned picture. Chaeyoung displayed the identical hat during TWICE’s appearance on MBC programme, “Radio Star”. She even said that the head accessory was her favourite during the show.

A few fans also flocked to Chimhwasa’s now-defunct Instagram account to search for more “proof”. Based on their findings, they found obscene drawings of women uploaded on his page. One particular art shows a girl with a mole on the left side of her face, which is coincidentally similar to Chaeyoung’s.

Others also spotted Chimhwasa wearing a ring that is nearly identical to the 21-year-old K-pop rapper. Is it safe to assume that they’re couple rings? Another evidence showed that Chaeyoung’s brother was following Chimhwasa on Instagram, up until his account was deleted.

TWICE’s agency, JYP Entertainment came forth to address the issue not long after the reports broke out. They briefly stated, “We do not have an official stance regarding Chaeyoung’s dating rumors.”

CHUNG HA 청하 ‘Dream of You (with R3HAB)’ Performance Video

Walnox - September 6, 2020 0
When it comes to fashion, our television actresses Krystle D’Souza, Divyanka Tripathi, and Jennifer Winget Rocks. Check out some below