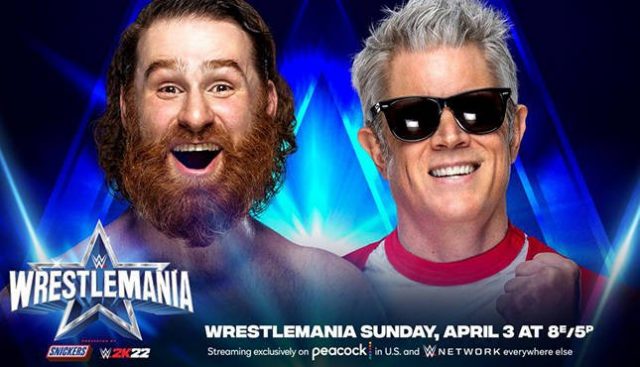 Sami Zayn vs Johnny Knoxville : Sami Zayn immediately hit Johnny Knoxville with a Helluva kick as the bell sounded. Knoxville used a fire extinguisher to even things up, but Zayn stopped Knoxville from using any weapons from a trash can full of them.

Sami Zayn used a baking sheet and a crutch to hit Knoxville across the back before pulling out a table from under the ring. Zayn then found a table covered in mouse traps under the ring, which he pulled out and set up only to run into Knoxville, who used a pair of trash can lids only to end up sent through a table in the corner with an exploder suplex.

Chris Pontius of “Jackass” would enter the ring and dance at Zayn before stripping down to his underwear. Wee Man then attacked Zayn and hit a bodyslam to set up a Knoxville tornado DDT for a near fall. Zayn took out Wee Man with a Helluva Kick.

Johnny Knoxville then used a giant mousetrap to pin Zayn and get the win. I don’t know what to say about this match. It was basically a Looney Tunes cartoon in the form of a wrestling match.

Some of the gimmicks didn’t work, but that didn’t really matter. As pure entertainment, the match was a complete success. Johnny Knoxville def. Sami Zayn via pinfall.