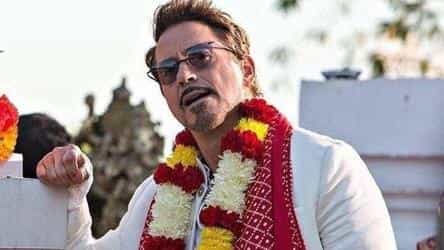 Robert Downey Jr happened to watch Lagaan and was blown away by Aamir Khan, whom he called ‘extraordinary’.

Did you know that one of Hollywood’s biggest stars, Robert Downey Jr, is a fan of one of the biggest stars in Bollywood: Aamir Khan? Hot off the success of the first Iron Man film, RDJ spoke highly of Aamir in an interview and called him the “Tom Hanks of India.”

“I happened to see Lagaan and believe Aamir Khan was extraordinary,” Downey told Bombay Times in 2010. He also said that he is very interested in Indian culture, and would love to visit the country sometime. “India is a land waiting to happen for me and I would love to visit it as soon as I get a chance. All that comes to mind when I hear of this country is diversity, vibrancy and Bollywood boogie,” he said.

Although the actor appeared in an Indian setting in the film Spider-Man: Homecoming, the scene in question wasn’t shot in India. As of 2019, the actor hasn’t had the chance to visit the country. He said while promoting Avengers: Endgame that he is grateful for his Indian fans.

During a video conference with groups of fans in several Indian cities, the actor reacted to their cheers and said, “Wow… I can’t believe it… This is incredible. I am humbled. I am going to bow in front of you… This is deeply appreciative.” He added, “You guys are just amazing fans. I can’t wait. I cannot believe I haven’t been to India. I’m coming there so damn soon.”

Downey ended his run as Iron Man/Tony Stark in the MCU with Endgame, although rumours of his return persist. Aamir, meanwhile, will next be seen in Laal Singh Chaddha, a remake of Tom Hanks’ Forrest Gump. The film has been slated for a December release, but will likely be delayed due to the coronavirus pandemic.

Try these Small Lifestyle Changes To Boost Your Energy & Mood