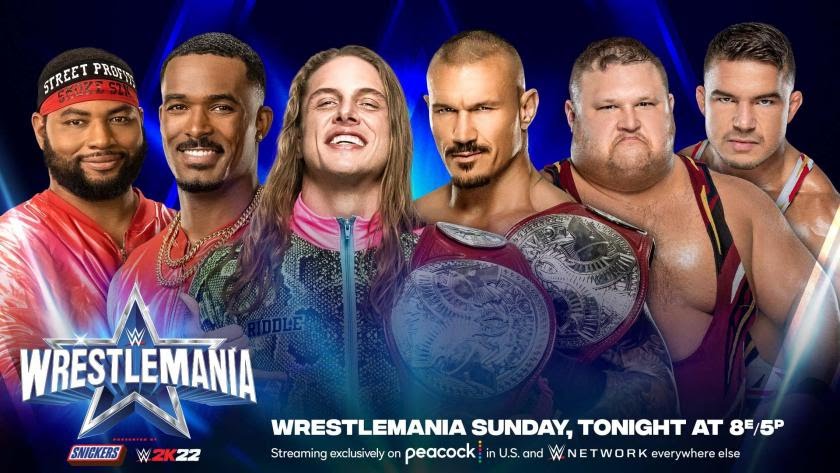 RK-Bro vs The Street Profits vs Alpha Academy : It took only seconds before all six men were involved in the match, ending with Otis as the last man in the ring before an all-out brawl as everyone entered the ring again. Montez Ford hit a flipping dive to the outside, only for Chad Gable to hit his own top rope moonsault to the outside seconds later.

Momentum swung wildly as men tagged in and out until Otis tagged into the match and hit both Angelo Dawkins and Riddle with a splash to break a pin, slightly slowing the match down.

Randy Orton eventually took a hot tag and cleared the ring, leading to both RK-Bro members spiking the The Street Profits with hanging DDTs. A huge near fall came when Fort hit Gable with a blockbuster as Gable was seated on Dawkins’ shoulders.

Riddle took out Ford with a springboard RKO as Ford was on the top rope and Orton hit Gable with an RKO of his own as Gable came off the top rope, scoring the win. Really fun, all-action match to get the show off on the right foot.

After the match, the Street Profits poured a drink for the champions before welcoming Gable Steveson to the ring to partake. Chad Gable then jumped in the ring and slapped the drink from Steveson’s hand.

Steveson whipped off his shirt and hit Chad Gable with an overhead belly-to-belly suplex. RK-Bro def. The Street Profits and Alpha Academy via pinfall to retain the titles.

Gwen Stefani | Let Me Reintroduce Myself | Music with Lyrics