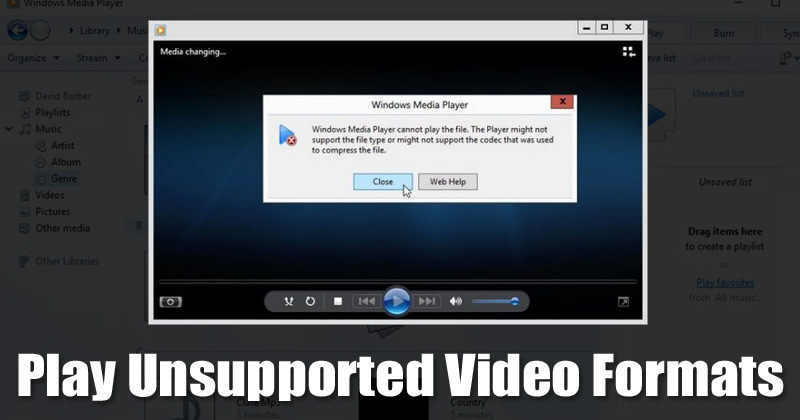 Play Unsupported Video Formats : Let’s admit, we all love to watch TV Shows, Movies, etc. on our computer. Since PC/Laptops provide us better movie-watching experience, more and more streaming sites were popping out of the web. Let’s admit, at some point or another, we all have come across a video that doesn’t seem to play because Windows don’t support it.

How To Play Unsupported Video Formats On Windows 10

It’s another best media player app for Windows 10 available out there. Media Player Classic is pretty much similar to the VLC media player when it comes to the feature. It supports all video and audio formats. It also offers users lots of tools and customization options that can take your video watching experience to the next level.

Although not popular, PotPlayer is worthy enough to be listed in the article. Compared to other media player apps, PotPlayer offers more customization options. Apart from that, it also supports hardware acceleration for high-resolution videos and includes a video editor.

Before using this tool, let’s understand what codec is. Codec is a type of tool that is used to compress or decompress a digital media file like a video or song. So, if your PC lacks the right codec for your video format, then the video won’t play.

K-Lite Codec Pack solves this problem. It is the most popular bundles of video codecs. Installing K-Lite Codec Pack will add extra video format support to Windows Media Player or any other third-party video player you are using.

Convert to Another Format

If you are still unable to play the video file, then you need to convert the video to another video format. There are plenty of video converter apps available for the Windows operating system.

You can convert your video to different formats like FLV or MP4 for proper playback.

How to open a Control Panel on Windows 10 : 5 different ways

Billie Eilish – No Time To Die (Live Performance with Lyrics)

Gwen Stefani | Let Me Reintroduce Myself | Music with Lyrics