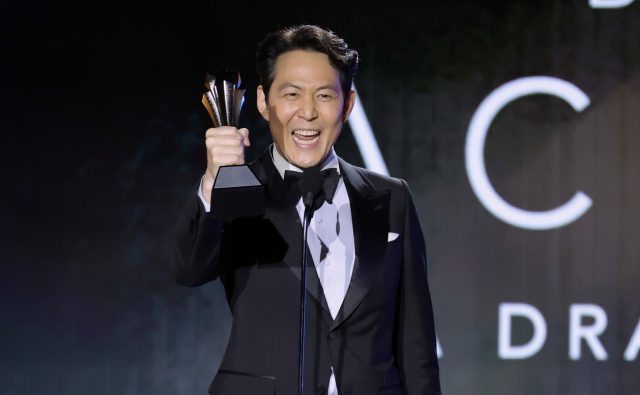 Lee Jung Jae, Jung Ho Yeon and Park Hae Soo of the Netflix hit series ‘Squid Game’ attended the Critics Choice Awards at The Century Plaza Hotel. A horde of crowd welcomed the three along with director Hwang Dong Hyuk at the awards night with loud cheers as cameras flashed around them.

Attending as presenters for the event, ‘Squid Game’ itself was nominated for three awards including Best Drama Series, Best Foreign Language Series and Best Actor in a Drama Series for Lee Jung Jae.

After their monumental win at the SAG Awards where Lee Jung Jae took home the Outstanding Performance by a Male Actor in a Drama Series award for his role as Gihun in ‘Squid Game’ and Jung Ho Yeon grabbed a teary Outstanding Performance by a Female Actor in a Drama Series award, making them the first Korean recipients of their respective categories, the eyes were all on them.

It seems as though the night was in definite favor of the team as Lee Jung Jae became the first Korean actor to win the category at the Critics Choice Awards.

Accepting his trophy with grace, the 49 year old megastar thanked God and everyone supporting ‘Squid Game’. Expressing difficulty in putting his feelings into words, the crowd giggled at the actor’s nervous but grateful appearance.