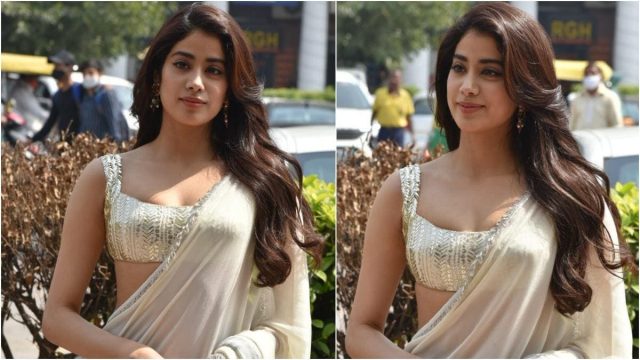 After setting our screens on fire with her jaw-dropping moves in Nadiyon Paar song from Roohi that rose instantly to dominate the chartbuster list, Janhvi Kapoor looked like an epitome of elegance and grace as she promoted her upcoming comedy horror film in a sensuous ivory saree.

Leaving fans hooked with her saree chronicles, Janhvi served another sizzling look from Manish Malhotra’s collection as she stepped out for her upcoming film’s promotions.

Taking to her social media handle a few hours back, Janhvi flooded the Internet with beautiful pictures of herself donning the six yards of elegance and fans could not keep calm.

The pictures featured the diva in a sheer chiffon saree that was simple and plain except for an embroidered silver lace running along the borders.

Janhvi teamed the classic gorgeous saree with an embellished golden crop blouse that sported golden sequins work and came with straps while flaunting her enviable waistline to amplify the hotness quotient.

Leaving her side-parted tresses open in her signature hairstyle, Janhvi accessorised her look with mirror-work bangles and a pair of kundan earrings.

The classic ivory saree is credited to Indian luxury designer Manish Malhotra’s eponymous label that boasts of bringing inimitable aesthetics to costume design and redefining fashion. Janhvi Kapoor was styled by celebrity stylist Mohit Rai and her look is perfect to recreate at the next cocktail party.

See Which Program Is Using All Your CPU on Windows