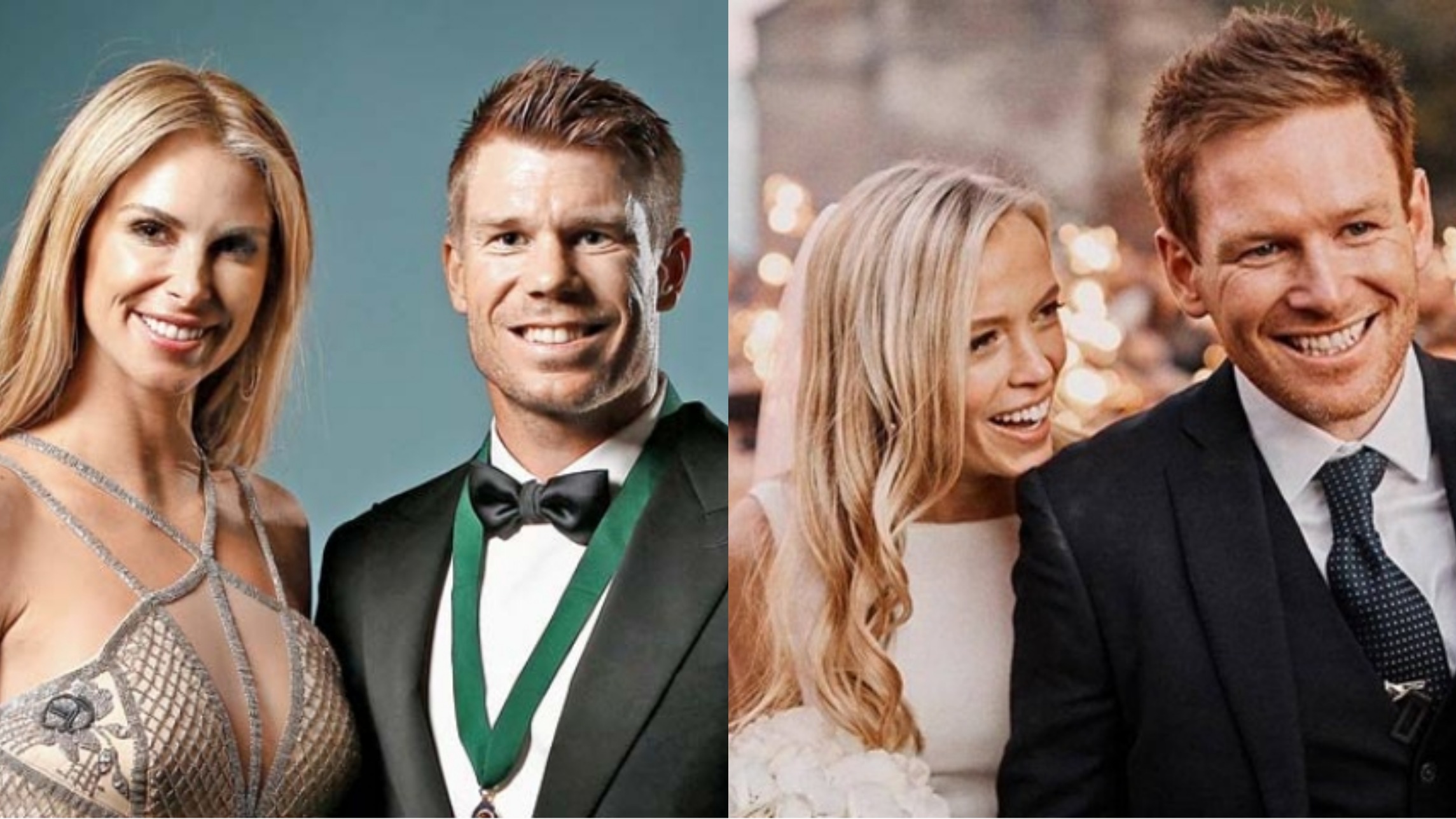 IPL 2021 is in full flow and the first week has already seen a plethora of breath-taking games. Every year, players in the IPL make a lot of noise in the international cricketing circuit and their Wives and Girlfriends (WAGs) are no far behind. However, players that stand out during the tournament are the captains who grab all the eyeballs.

Now that the bubble0life is the new common in the cricketing circuit, the Wives And Girlfriends (WAGs) of these players have a crucial role to play in ensuring that they are mentally fit for any challenge. During IPL 2021, we have already seen the WAGs of certain players accompanying them in the bubble.

Their presence in the stadium acts as a major boost for the players. In this article, we talk about the Wives And Girlfriends of all the 8 captains of IPL 2021.

The current Indian skipper and Royal Challengers Bangalore captain Virat Kohli and Anushka Sharma have been the talk of the town ever since their relationship came to the limelight.

Kohli stunned the internet with extraordinary marriage arrangements in Italy and tied the knot with Anushka on December 11, 2017. The couple was blessed with a girl baby named, Vamika on January 11, 2021.

Anushka has not joined the bubble alongside Virat and is currently away from the RCB camp in order to get back to work. Virat had returned home after India vs England series to meet his wife and daughter and then he joined the RCB bio-bubble in Chennai. RCB have had a spectacular start to IPL 2021 as they have won both their opening fixtures, leading the points table.

The Indian limited-overs vice-captain and Mumbai Indians’ skipper,  Rohit Sharma, fell in love with Ritika Sajdeh who was his sports manager for 6 years. Rohit tied the knot on 13th December 2015 with Ritika and ever since then, the couple has been sharing a lot of lovely pictures together which has been going viral. They were blessed with a baby girl named Samairah in 2018.

Ritika is one of the most active among the WAGs as she can be seen cheering for Mumbai Indians and Rohit Sharma in all their IPL games. She is currently in the Mumbai Indians’ bio-bubble in Chennai along with their daughter Samaira, who is also in the bio-bubble. In IPL 2021, Ritika has been in the stand cheering the Men in Blue in both their opening games.

The former Indian legendary captain and the Chennai Super Kings’ skipper, Mahendra Singh Dhoni did find his partner in Sakshi Singh and the couple got married in a traditional way in Dehradun.

Dhoni tied the knot with Sakshi on July 4, 2010, and the marriage photos went viral on the internet. They were blessed with a baby girl named Ziva Dhoni in 2015.

Sakshi who is one among the WAGs of the captains is generally seen in the stands supporting her husband and Chennai Super Kings. When IPL 2020 took place in the United Arab Emirates (UAE), Sakshi too had travelled with Dhoni to support her husband and the franchise. However, in IPL 2021, she hasn’t accompanied Dhoni and is not present in the CSK bubble due to the worsening COVID situation in Mumbai.

The new Rajasthan Royals skipper Sanju Samson who started his 2021 IPL campaign with a magnificent century had tied the knot with long-time girlfriend Charulatha in 2018.

The marriage was simple but turned out to be very beautiful as well in a Kovalam resort. Charulatha and Sanju Samson are college classmates and their Instagram photos have been really charming.

Much like Samson, Charulatha also doesn’t seem to come into a lot of limelight. It will not be wrong to say that she is the least talked about WAG of all the 8 captains of the IPL franchises.

So far, Charulatha has also not joined the RR bio-bubble in IPL 2021 and she might be seen in the stands at a later stage in the IPL. RR have had a poor start to their IPL 2021 campaign with a loss in the first game against Punjab.

The couple is blessed with three daughters named Ivy- Mae, Indi- Rae, and Isla Rose. Warner is closely associated with his family and a lot of videos of him playing with his children in the backyard of his native place had been around the internet.

David Warner has become an internet sensation in India because of his hilarious Tiktok videos. In his videos, he is mostly accompanied by his wife, Candice Warner and all three daughters too.

Candice Warner has to be the most famous overseas WAG in India. She hasn’t travelled to India for IPL 2021 with David Warner and is currently in Australia, rooting for her husband and SRH.

The couple is blessed with a boy baby named Leo Louis Olivier Morgan in March 2020 and their love has brought them from a long distance together from Adelaide, Australia to London, England.

Like the other WAGs, Tara Ridgway doesn’t come to much limelight. She hasn’t travelled to Indian alongside Eoin and is currently in the United Kingdom.

There isn’t much information about her being and she has made sure that she maintains her privacy. It will be interesting to see if she happens to join the KKR bubble in the coming games like the other WAGs.

The current Indian batsman and Delhi Capitals’ skipper Rishabh Pant who has been in the form of his life wasn’t shy to recently post a photo with his girlfriend Isha Negi on Instagram and he has been very public about his love life too.

He has tasted a lot of success in recent times and the relationship with Isha Negi could still be a rumour as they haven’t announced anything officially.

Since Rishabh Pant hasn’t made his relationship official, it wouldn’t have been a wise decision to have Isha Negi alongside him like the rest of the WAGs who have travelled with the players.

Hence, Isha Negi hasn’t been in the DC bio-bubble but she keeps supporting Pant through her Instagram stories as the latter has had a sensational start to IPL 2021 with a win over Chennai Super Kings (CSK) in the opening fixture.

Indian wicket-keeper and Punjab Kings captain KL Rahul is yet to announce his relationship with actress Athiya Shetty but they have been wishing each other on Instagram on birthdays with interesting captions.

Their pictures on social media certainly show that they have been dating and it will only be a matter of time when they announce something officially.

As of now, Athiya Shetty hasn’t accompanied KL Rahul like the other WAGs of the franchise have done. However, it is certain that she must be supporting  Punjab Kings (PBKS) as they eye a maiden IPL title this year, Their campaign began with a bang against Rajasthan Royals as they clinched a nail-biting thriller by 4 runs. Hopefully, like the other WAGs, Athiya will soon be in the PBKS stands.