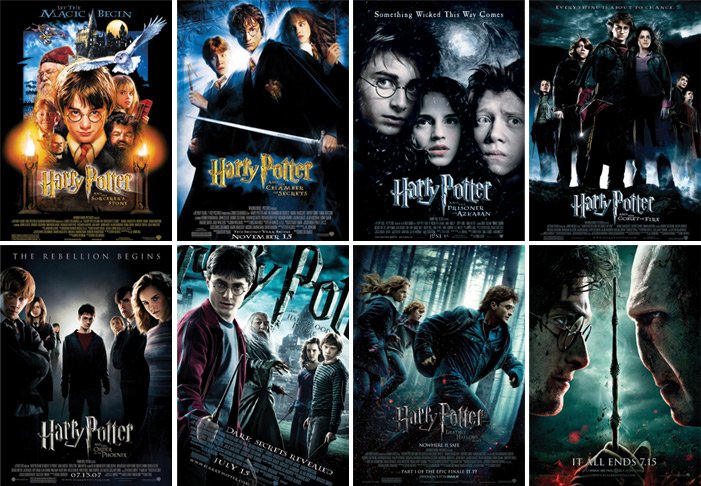 2. Leaky Cauldron sign can only be seen by magical people. So Harry and Hagrid can the sign when they get closer to it.

4. When Neville gets a Remembrall from his grandmother he says that he can’t figure out what he has forgotten, but in this scene it is clearly shown that Neville has forgotten to wear his robe.

5. When Harry, Ron and Hermione go to the chess match, we can see the remains of the match of Quirrell.

6. This picture perfectly describes the personality of the trio —the way they have worn there scarfs. Hermione’s have been neatly tucked, Harry’s looks like he has been messing with it and Ron’s is like it has been left untucked.

The Chamber of Secrets:

2. In this scene we can see Gilderoy Lockhart’s wig which means that his hair is in a bad condition and his hair care products are fake.

3. Sherbet Lemon is the password of Dumbledore’s Office which is also his favourite muggle candy. In The Half Blood Prince we can see those candies on his desk.

4. In the beginning of the movie Lucius Malfoy takes one book from Ginny’s cauldron but puts back two books — the second one was obviously Tom Riddles diary.

5. After seeing The Half Blood Prince you should have known that magical folks don’t know who dentists are —like Hermione explains Professor Slughorn who they are. But take a look at the Weasley family magical clock, its says Dentist. This describes how fascinated is Mr. Weasley with muggles. And also that Fred and George are at the same end of the scissor which shows that they never do anything or go anywhere separately.

The Prisoner of Azkaban:

2. A wizard is reading Stephen Hawking’s ‘A Brief History Of Time’.

The Goblet of Fire:

1. There is a wizarding world version of Cheerios called CheeriOwls and Reese’s Puffs as Pixie Puffs.

The Order of The Phoenix:

1. There is a wizarding world version of Cheerios called CheeriOwls and Reese’s Puffs as Pixie Puffs.

The Half Blood Prince:

1. Harry’s quidditch jersey number is 7 which is also the most powerful number in the wizarding world and 7 is the position of the seeker.

2. In the Chamber of Secrets, Sherbet Lemon is the password of Dumbledore’s Office which is also his favourite muggle candy. We can see those candies on his desk.

1. Hermione’s hair growth throughout the movie shows how long she, Ron, and Harry have been traveling in search of Horcruxes.

1. Snape is still helping the Order of the Phoenix when he re-directs McGonagall’s spells to his fellow Death Eaters.

2. You can see Lucius Malfoy’s Azkaban prisoner number tattooed on his neck.

And the Last One :

Harry Potter intros become darker every year, just like the books and the movies…

Walnox - November 27, 2020 0
Celebrities have always influenced fashion in India. From weddings to airport looks, everything that celebs wear becomes a trend and we have...