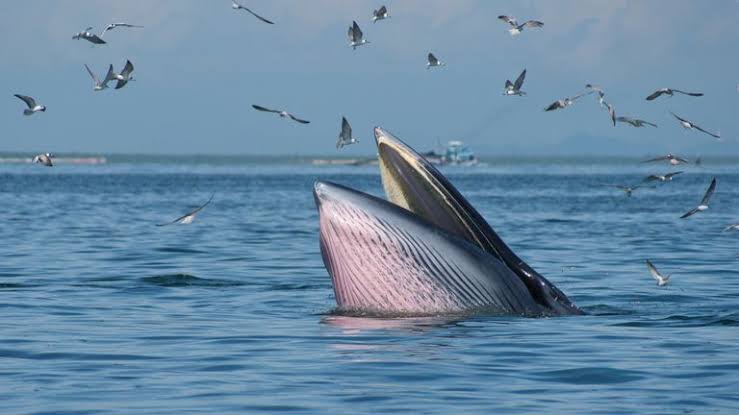 Thrilling drone footage of two Bryde’s whales swimming near surfers at a beach in Australia surfaced on the internet recently. The incident took place at the Seven Mile Beach near Lennox Head, south of Byron Bay, a town in Australia.

A Sydney photographer, Daniel Cook, captured the drone footage. It shows the 12-metre-long whales swimming with a pod of dolphins, as surfers catch the waves above them. According to the Daily Mail, the whales, weighing about 12 to 20 tonnes each, were hunting a large school of bait fish when the incident took place.

The video shows a bunch of surfers swimming in the sea as a whale, and a pod of dolphins swim nearby. At one point, a surfer rides the wave, and at the same time, a whale can also be seen crashing into the wave. After some time, another whale joins the first one, as the surfers enjoy nearby. Speaking to Daily Mail, Cook said that filming the whole scene was a “one in a million moment.”

“We were looking at the surfers and saw a pod of dolphins, so my partner thought it would be a good idea to get the drone up and film them. While I had the drone up, she called out and said “there’s a whale out there!” And the whale just came into the shot,” he said.

According to him, everyone kept a safe distance despite the close calls. He added, “It was just amazing to see how the surfers came into contact with the whales. I don’t think anyone actually touched the whales. Everyone was pretty mindful of the dolphins and whales near them. I got footage of a surfer trying to catch a wave but one of the whales undercut him so he had to let it go.”

TWICE | “The Feels” | Music with Lyrics