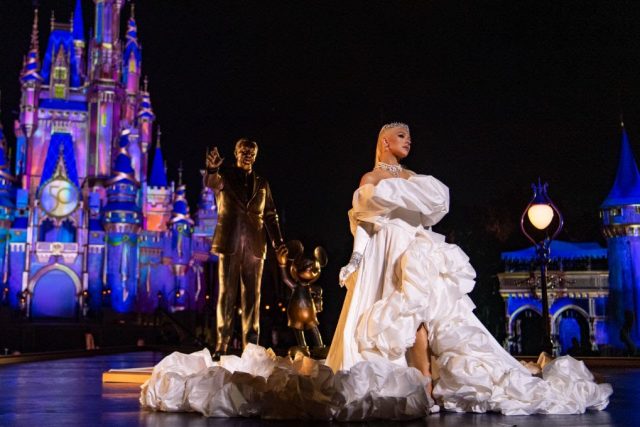 Christina Aguilera is performing on tonight’s ABC spectacular, “The Most Magical Story on Earth: 50 Years of Walt Disney World.”

Airing tonight at 8 p.m. ET, Aguilera takes center stage in front of the iconic castle in her own royal gown; the off-the-shoulder design includes a silky white fabric with a dramatic high-low hem and floor-sweeping train.

The look also included a layered pearl necklace and a glittering tiara with bejeweled gloves to match.

When it comes to shoes, the “Genie in a Bottle” singer is no stranger to a heightened look. More often than not, you can find Aguilera in boots, sandals and pumps that come set atop a teetering heel.

Check out the pic’s below :

Even throughout her time in quarantine, the musician continued her streak of bold footwear choices. Christina Aguilera’s towering heels and designer duds last night serve as further examples of the singer’s standout style.

From Viktor & Rolf couture gowns to Gina Shoes latex thigh-high boots, the former “The Voice” judge has a knack for taking her outfits above and beyond the expected.