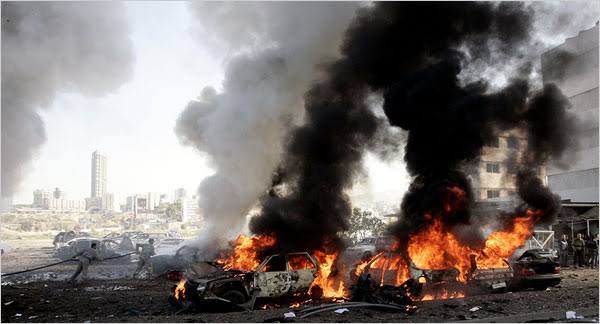 CHENNAI: After unsafely stored ammonium nitrate killed at least 135 people and injured thousands in Beirut, concerns have been raised over 690 metric tonnes of the chemical that has remained in storage for years under the custody of the Customs Department here.

According to Customs Department sources, 740 tonnes of ammonium nitrate (prill type) in 37 containers, valued at Rs 1.80 crore, was seized by Chennai Customs in November 2015 from Sri Amman Chemicals of Karur.

The importer had misdeclared the goods as ammonium nitrate of fertilizer grade whereas on examination it was found to be of explosive grade and had not followed Ammonium Nitrate Rules 2012.

These seized containers are lying at Sattva Hi Tech Container Freight Station in Manali in the city. It is learnt from the Customs Department that 690 tonnes of the chemical is under the process of e-auction. The remaining were damaged during the Chennai floods in December 2015.

While Customs Department sources claimed that the consignment has been mandated a unique procedure for safekeeping, fire safety experts warned that if there is such an explosion, the state doesn’t have adequate mechanisms in place.

V Sivaramakrishnan, a fire consultant, told The New Indian Express that the state is not aware of how many people are handling it once it is offloaded in the port. He said there is need for a safety audit to be done across the state or even in the country on who is handling how much of the chemical and whether it is kept safely. In any warehouse, ammonium nitrate should be compartmentalised and not allowed to mix with combustible chemicals.

Ammonium nitrate is produced as small porous pellets or “prills” and is one of the world’s most widely used fertilisers. It is also the main component in many types of mining explosives, where it’s mixed with fuel oil and detonated by an explosive charge. Due to its explosive nature, ammonium nitrate has been used by armies and terrorists.

For an industrial ammonium nitrate disaster to occur, a lot needs to go wrong. Tragically, this seems to have been the case in Beirut, said Sivaramakrishnan, who even volunteered to do the safety audit for the state.

He says ammonium nitrate does not burn on its own. Instead, it acts as a source of oxygen that can accelerate the combustion (burning) of other materials. “For combustion to occur, oxygen must be present. Ammonium nitrate prills provide a much more concentrated supply of oxygen than the air around us. This is why it is effective in mining explosives, where it’s mixed with oil and other fuels,” he says.

Keep the Calculator app always on top in Windows 10