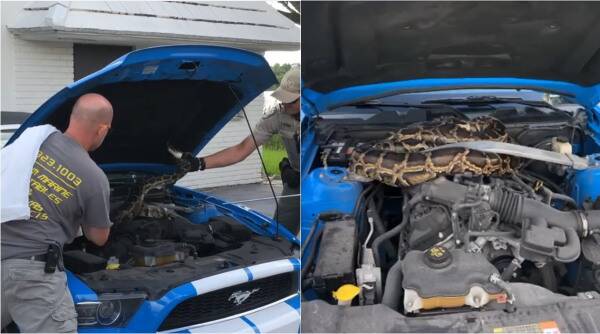 A owner of a Ford Mustang was shocked to find a massive Burmese python under the hood of the sports car in Dania Beach Thursday morning.

No one was hurt during the snake extraction.

Pythons are an invasive species in Florida and are found largely in south Florida and in the Everglades. Burmese pythons are native to Asia, from eastern India through Vietnam and southern China.

FWC officials say the snakes are a threat to native wildlife as predators and also competition for food. A 2012 study found that the most severe decline in native species happened in the southernmost region of the Everglades National Park, where marsh rabbits, cottontail rabbits and foxes “effectively disappeared,” according to the USGS. The raccoon population fell by 99.3%, the opossum population by 98.9% and the bobcat population by 87.5%.

The Burmese python population in the state is believed to have been created in part by escaped or released pets.

Hurricane Andrew may have also contributed in 1992 to the growth of the python population in Florida. A documentary says one of the exotic wildlife facilities destroyed during the storm was a breeding facility for the animals.

“Thousands of specimens of exotics [sic] species escaped their caging and enclosures during the passing of the storm through south Dade County,” Florida environmental inspectors said days after the storm. “Witnesses spotted hundreds of large snakes and non-venomous snakes loose.”

The FWC encourages residents to remove and humanely kill the constrictors “whenever possible.”

Learn from Shivangi Joshi : How To Choose Lehenga For Party Function?

How to Set Up Ad Units in Google Ad Manager | Google ad manager...

Over the Moon | What Asian Americans Love Most About Their...

Walnox - October 31, 2020 0
Over the Moon is a new animated film that is rooted in Chinese folklore and traditions. We brought together families of different Asian heritage...